A new surgery offers hope for normal mobility in individuals with severe adult flatfoot deformity, a problem that is becoming increasingly prevalent in this country.

Adult acquired flatfoot deformity develops in people who have always had flatfeet, but the condition worsens to the point of virtually crippling the individual. It is more prevalent in women and in those who are overweight, and it usually develops when people are in their 40s and 50s. In stage I of the deformity, the tendon that runs along the inside of the ankle begins to degenerate. In stage II, the arch begins to fail, and the person develops a more severe case of flatfoot. As the arch continues to collapse, mobility becomes difficult and the foot becomes stiff, which is considered stage III.

In stage IV, the ankle tilts inward and is at risk of developing arthritis as a result of the deformity. "These people have tremendous flatfoot to the point that their ankle is involved," first author Scott Ellis, M.D., foot and ankle orthopedic surgeon at Hospital for Special Surgery in New York was quoted as saying.

"Before this study, we were not sure whether you could salvage patients with flatfoot and ankle deformity and correct their ankle as well as their foot deformity," Jonathan Deland, M.D., chief of the Department of Foot and Ankle Surgery at HSS, was quoted as saying. "Now we know that with this technique you can save the ankle, and it provides a correction of the deformity even at nine years after surgery."

Currently, if the ankle deformity is severe and symptomatic enough, surgeons either perform an ankle replacement, which is very difficult or they may fuse the ankle. "The fusion is not ideal because it takes all the motion away in the ankle in a patient who already has a foot problem," Dr. Ellis said. "Imagine walking without motion in your ankle. It changes your gait and it leads to arthritis in the other joints of the foot over time, eight to 10 years down the line, because you start having to use those joints to take up the slack of motion that is not occurring in the ankle."M

HSS investigators conducted the new surgery in five patients, average age 67 years. "The X-rays showed the maintenance of the correction of the tilt. The alignment was still improved nine years later," said Dr. Ellis. None of the patients developed arthritis.

After surgery, patients reported they were able to walk an average of 25 blocks, equivalent to 1.25 miles. Two patients continued to play golf without significant problems, another exercised regularly on a treadmill, one was involved in circuit training, and the final patient played volleyball, though he did notice some stiffness. All patients reported they were satisfied with the procedure and, given the result, would have the operation again. 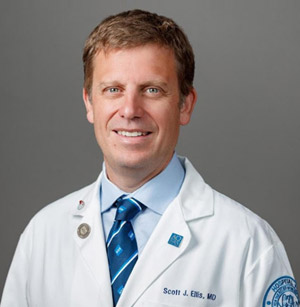